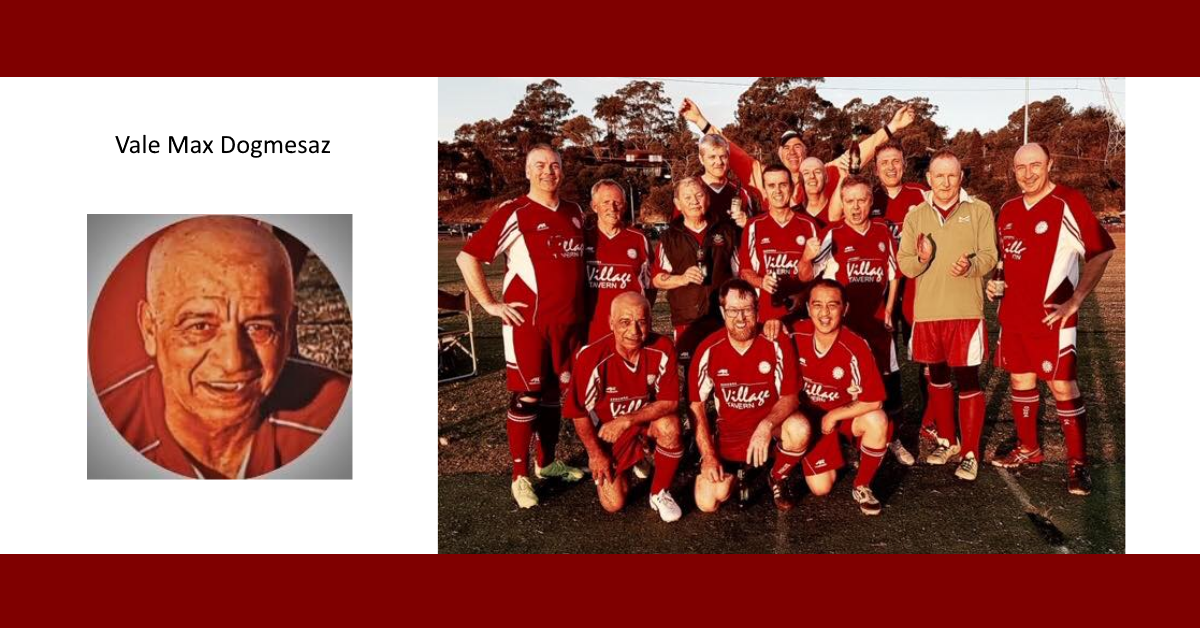 It is with great sadness we write to advise that Max passed away yesterday (5th January), Max has been a member of Berowra Football Club for almost 20 years and was well known around the club.

I first met Max in 2001 when he arrived at Sunday Morning Football. Sunday Morning Football is a fitness kick around that is held throughout the Summer recess for O35 & O45 Players and our kids. He enthusiastically joined in but like a lot of players who come back to the game after a few years was soon exhausted after about 5 mins. However he persisted, got a lot fitter and his good football skills and passion for the game was soon apparent. Max always turned up to Sunday Morning Football late, sometimes halfway through the session, and was known to miss it all together, but still turn up, especially if it was daylight saving weekend!

Max occasionally brought his little dog to Sunday Morning Football much to the consternation of the rest of us as the dog liked to join in. I remember Max shouting at the dog and then running after him to get the soon to be punctured ball back. Hilarious!

Max developed into a midfielder with good skill and touch. He was not a forward and if he was in defence he tended to drift forward or hang all the way back! He’d get the ball and press forward before either shooting or laying it off to a forward. Who am I kidding Max always had a shot at goal if he had the smallest sniff at goal and he scored a fair number. Only the rebounds really went to the forwards. Max sometimes had difficulty dropping back to defence after a forward run. I remember him walking back to defence with his hands on his hips and I suggested that he either ran back or sub. But for Max subbing was not an option that came naturally to him. He did come off but it took a lot of persuasion! He was a great utility player.

Max was a conscientious in coming to training on Wednesday nights. Again he tended to come late and the main purpose was not really to train, but to attend the after training strategy meeting at the Berowra Tavern where he liked to drink Coopers Green. In moderation of course. Late nights and great times.

Max predominantly played in O35 Div 3, Div 3 reserves or Div 4 and when he got older O45 div 3 reserves. He played in many teams and made many, many friends.

Max always keen to take Penalties. Problem was he wasn’t very good at them. In one game he ran forward to take a Penalty and kicked it directly to the goal keeper. Luckily one of the defenders encroached the penalty box so the ref ordered it retaken. The ref put the ball down, turned around to take position, and Max kicked a goal before the whistle was blown. The ref then ordered the penalty taken once again. This time Max waited for the whistle (just), went for an almighty kick that sailed 20 feet over the bar. I can’t remember Max ever scoring a penalty, but because he always ran forward to take them always seems to get more than his fair share!

Max was famous for bringing a huge box of assorted nuts and dried fruits to a game. The whole team consumed this Persian delicacy with relish after the game. Everybody still talks about “Max’s Nuts” to this day.

Max was a Persian, not Iranian ,and he had a very happy and engaging manner about him. He was always laughing. He broke down cultural barriers and over the years got many friends in both Berowra Football club and Club Berowra. In the last few years he was a keen snooker/pool player and was a stalwart at Club Berowra.

Max also came out on my boat frequently. He was my crew. Again he always brought a pile of delicacies with kebabs, vines wrapped delight and super sweet desserts. Captain Steve, First Mate Michael and chef Max

When Max got the news that his illness was terminal one of his wishes was to have one more Persian BBQ for all his mates from Berowra Football Club and Club Berowra. This was organised at the beginning of November at Daves place in Berowra. Max catered for this fully and even though was getting weaker cooked up a storm with excellent help from Gabby. Over 50 people drifted in and out over the afternoon and Max had a blast. A great day and again just too much food!

Max was very thankful for all of the people who donated to his GoFundMe page which raised over $1000. Predominantly from members of Berowra Football Club and Club Berowra it shows a great community spirit. These funds will go directly to his family to help with his funeral costs. Many thanks Berowra!

Max died today on Sunday the 5th Jan 2020. He is survived by his Wife Gazelle, Son Parsa and Daughter Bita. He was 63 years old.

So Max from all your friends at Berowra Football Club and Club Berowra you will be sorely missed.